I host a Meetup group here in Santa Barbara for women who like to make art and journal. I have been in Santa Barbara for less than a year and last fall I was looking for a crafty, creative group to join and a way to make some new friends. I couldn’t find one to join, so I started one and am so glad I did.Â  We come together each month to create art and write. There are usually about 10 of us, from all different backgrounds, life stories, parts of the world and even parts of Santa Barbara County. What brings us all together is the deep draw to creative expression. It’s something that’s missing in our daily lives and we need more of it in order to thrive. The feedback I am receiving is that the women love showing up and having everything ready for them: the project, the writing prompts, the supplies, the lesson plan… they don’t have to think about it or prepare for it.

Why use Writing Prompts?

Writing at the Santa Barbara Museum of Art

At the Santa Barbara Musuem of Art, there are two exhibits that knocked my socks off on display right now. One is called Myth and Materiality and is a collection of 20th Century Latin American Art. There are some stunning pieces, many by well-known artists like Diego Rivera that I was familiar with, but there were other artists I had not heard of before from all over Latin America. I am particularly fond of contemporary Mexican artists like Rivera, Siqueiros and Orozco and was excited to see paintings by them I had not seen before.

In the gallery beside this one, there is a collection of mostly black and white photos by Danny Lyon. I was not familiar with his photography but was instantly captivated by the starkness, the honesty and the intensity of his work. In this collection were images of a Chicago biker gang that Lyon hung out with and apparently he is partly responsible for the romanticizing of the biker culture and popularizing the allure of motorcycles. There were also a series of photos from Texas prisons – intense, dark and difficult to look at because they were so real and so honest. Finally, there were some beautiful, honest and very difficult images from the Civil Rights movement, including a candid photo of Martin Luther King, Jr. 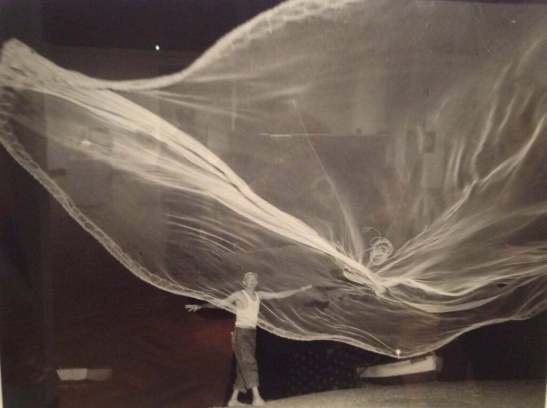 I was so moved by these exhibits that I decided that our Meetup needed a field trip. The SBMA is free on Thursday nights, so we planned a “Writing in the galleries” Meetup. We met on the front steps and I handed each person a series of writing prompts and gave them some general guidelines for the experience. We wrote for an hour and then regrouped at a nearby restaurant for some wine and conversation. I had to share with you what M.Y. Mim wrote about one of the Cuban photographers, it’s so beautiful! Like me, Mym had visited these exhibits several times before, they are that good. Mym is a former journalist and art critic, so I guess I wasn’t surprised by how beautifully she captured the essence and symbolism of this image. What we all discovered was that the writing prompts forced us to look at the painting or photography with fresh eyes. Here is Mym’s reflection on Raul Corrales’ “The Fishing Net” which is shown above:

And yet, the picture is ineffably Cuban.

Shot in aÂ small fishing village, a solitary man stands in a balletic pose â€“ arms stretched outward, feet in third position â€“ behind the transparent net that flies through the photo, both a sail and a scrim.

The woven net waves through the photograph as the dominant image. The undulating shape suggests a scallop shell, or anemone, or a passing cloud. A loose thread in the middle of the net forms a charming, startling curlicue: a definitive line against the fluidity of the net.

The fisherman’s outstretched left arm gesturesÂ toward this focal point in the net, drawing the observer’s eye toward the net, then up the curl, to follow the billowing curves, and back down again, gently, to the left-hand boat in the sea, up the sensualÂ sloping swell of the dune in the foreground, back to the fisherman.Â The man’s pointed foot leads us to the right, to the second boat, from which the net emanates, and we are led back up again to repeat the gaze.

This black and white masterpiece simultaneously draws us in and sends us out into the dark night, away with the boats out at sea. Anchored in the Cuban shore, we travel into the Bay as the fisherfolk do.

CorralesÂ varies the textures as equally as he contrasts the tones. Textures presented include the patterned ethereal translucency of the net, the grittiness of the sand, the solidity of the man, the hazy murkiness of the boats, and the density of the dark night.

Â Why ineffably Cuban?Â The image evokes freedom, suggesting the triumph of the impending Cuban revolution. This circa 1950 photo was taken in the midst of the revolt, when success seemed inevitable. In fact,Â CorralesÂ became Castro’s official photographer.

Â In contrast, recent Cuban artwork expresses a longing to escape.Â Corrales’ masterpiece testifies to the glory, optimism, and faith in the Cuban revolution, As the net throws over the image, so, too, the overthrow of the Batista regime brought promise, a harvest of plenty.

I wanted to share those writing prompts with you here today and encourage to visit a local museum and spend some time writing in the galleries. If you can’t get to a museum, surf the internet or hang out on Pinterest for a while. Find a work of art that speaks to you and follow the prompts below. It will help you see art through fresh eyes but it will also stretch your writing muscles. Writing prompts are great for stretching us, encouraging us to write about new topics. While the majority of us are not art critics or journalists and don’t aspire to be, we do know what we like, we know what feelings art evokes. Have fun with this prompts and commit to writing in a gallery soon!

Roam around the exhibits for a few minutes until you see a piece of art that grabs you and you canâ€™t walk away.Â  Take a few moments to absorb the artwork, really look at it.

When you have written as much as you want about this piece, move on to the next one. We found that an hour of this was perfect, even thirty minutes would have worked. It’s not about how much time you spend, it’s about spending enough time with one work of art to really see it and feel like you know it.

What are you creating today?

Would you like more help and some fun, easy-to-follow lessons on using creativity as a spiritual practice in your life? I am offering an 8 week virtual workshop called Artful Meditation. This is perfect for anyone who loves art and journaling and would like to create a more mindful approach to your creative practice. Perfect for beginners wanting to remember how to be creative or those who want to deepen and expand their creative practice. Click here to get all the details and sign up today. Cost is only $47.00!