Mixed Feelings and Stories about the Pentagram

When I think of the symbol of the pentagram, I think of movies or books where this symbol is used in rituals for magic, some for good and other times for evil. As I began to explore the meaning of the pentagram for my 100 day project, I realized I had some mixed feelings about the pentagram. What does it symbolize and why did I have resistance to seeing or drawing it.

I did make up for that today by taking some time to draw a tangled version of the pentagram that made me happy. You can watch the video of me drawing the entire thing over on my Instagram feed. 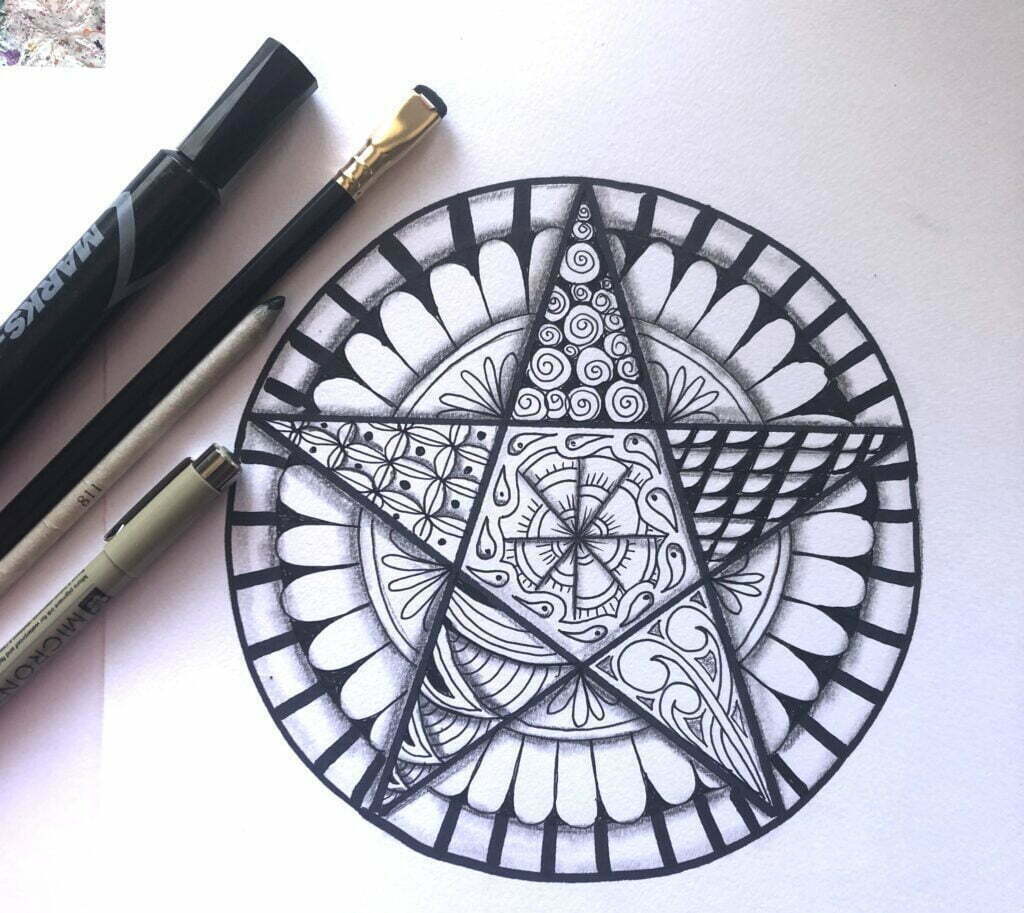 I love stars, I draw stars all the time in my doodles or in the backgrounds of paintings. But what is different when you add that circle around it? I realized that old stories from being raised Catholic about magic and witchcraft being evil still reside in my subconscious. I say I believe in magic. But do I really? 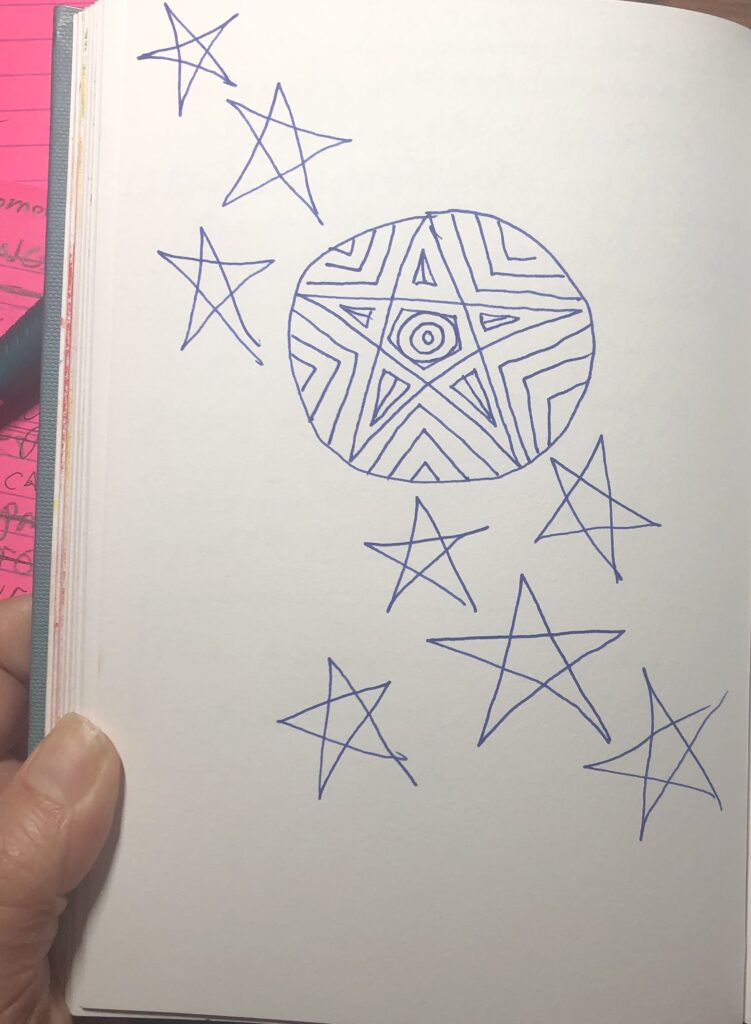 And of course, I found my answer in a most coincidental place. I just started reading a book called Ariadne’s Thread: A workbook of Goddess Magic by Shekinah Mountainwater. I can’t even tell you how I found the book on Amazon. It showed up in my Kindle Unlimited meaning I could read it for free. It sounds interesting so I downloaded it and started to read.

This morning I turned the page to find this image of the pentagram and her logic about the meaning of the image. Ohhhhh, I thought to myself, this makes sense. There was a moment of recognizing myself in this ancient story and restorying of myself. I have been on a journey to first own the feminine aspects of myself with deep love, appreciation and acceptance without tossing out or ignoring the masculine qualities. I believe in balance and integration. 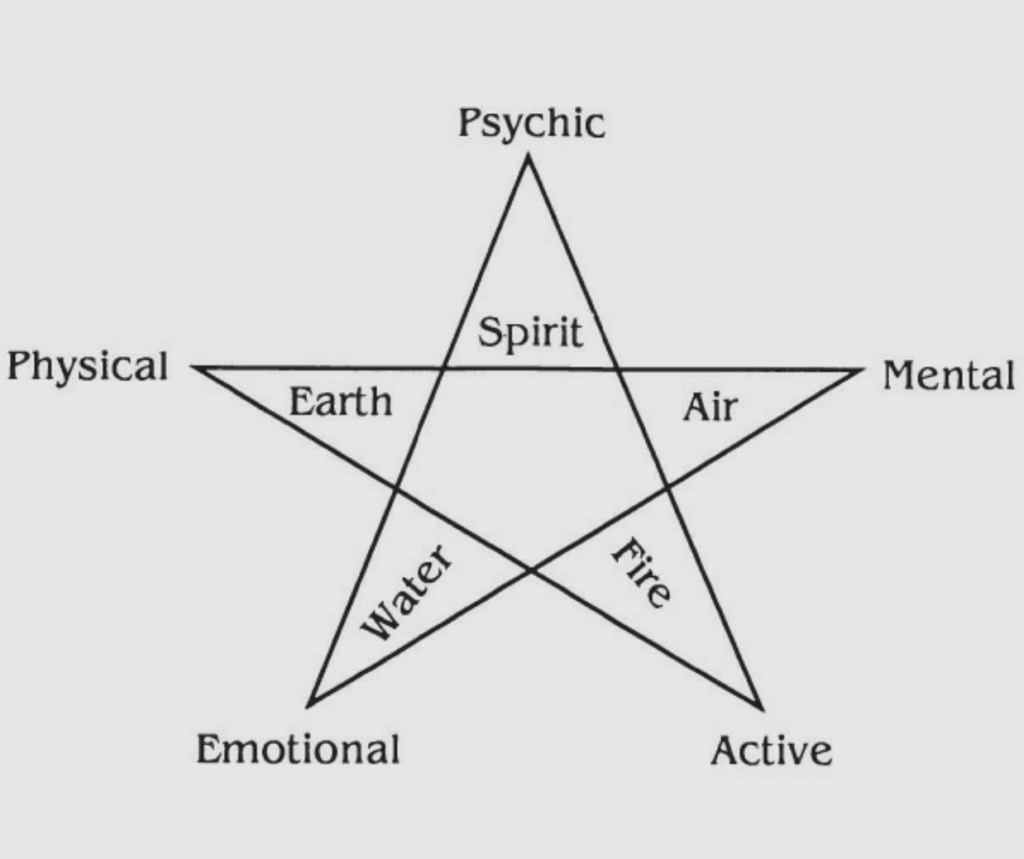 One of the ancient meanings of the five-pointed star is our own human form with head and four limbs. We are five-pointed stars or mini-universes (or goddesses) each containing within us the Air of our thoughts, the Fire of our actions, the Water of our emotions, the Earth of our bodies, and the Spirit of our psychic abilities and souls.”

I love that the pentagram represents the whole of the self and Mountainwater’s suggestion that we stand or lie in the shape of the 5-pointed star and feel the magic, the energy that pours through us when our masculine and feminine are aligned.

Throughout my academic and personal studies of feminism and what it means to be a woman today, I have looked for the places where I have lost the thread of herstory or failed to see the invisible veil or cage of the patriarchy. I feel like this is one of those moments in time where I need to bring the fullness of who I am as the five-pointed star to my life and my work.

I have a new awareness and fondness for this pentagram and it’s powerful symbolism for humanity. We all need to be open to seeing the fullness and magic of each other. We are interconnected at every level of the physical and the metaphysical and the spiritual. We all have to be our best selves if we are going to survive and thrive this pandemic.

I don’t know about you, but I am hopeful and inspired by the kindness and generosity I am witnessing around me. This is not a female, male, color, gender, political issue – this is a human issue and it’s bringing out the best in many people. It’s reminding me to pause, to make time for sacred ritual, to gather the symbols and the prayers and express deep gratitude for being human and being alive on this planet.