The Triskelion: a symbol for the ages 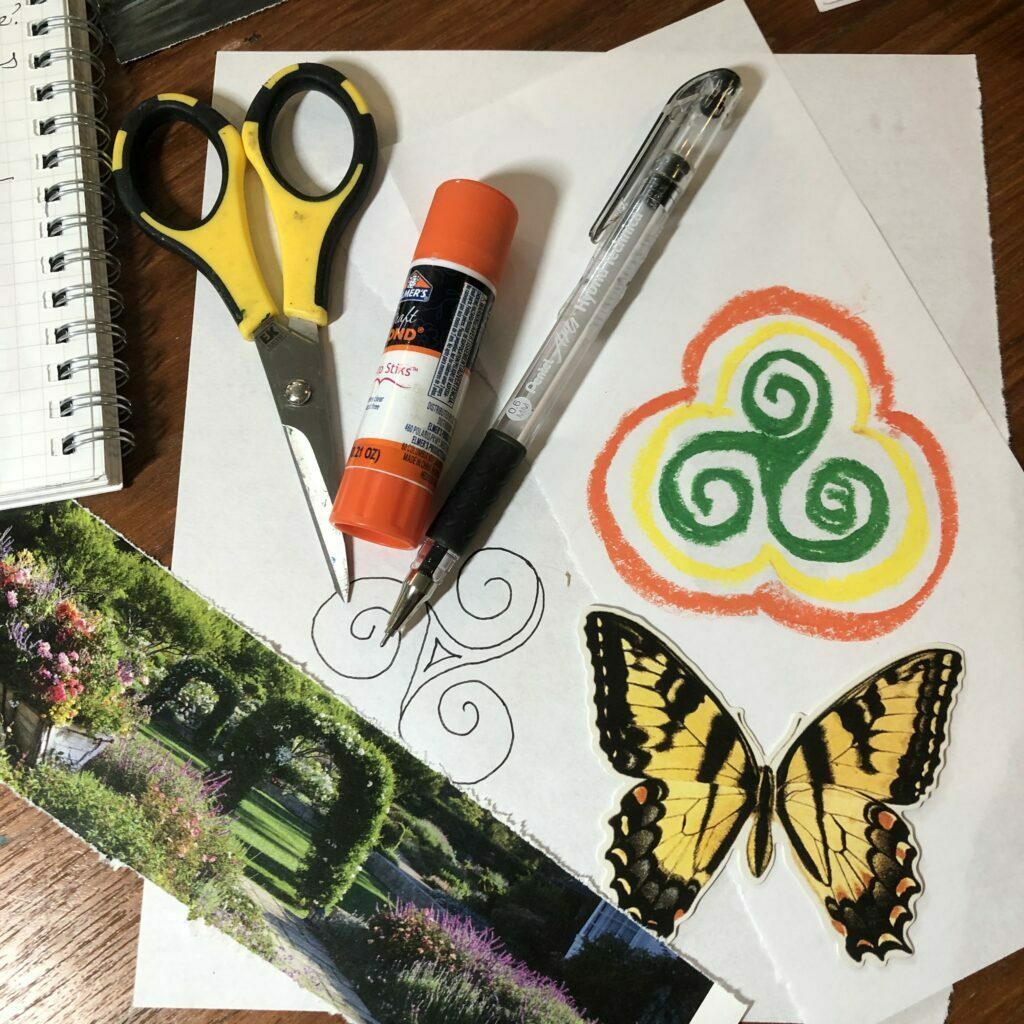 I have an obsession with spirals of all kinds. I draw them, I admire them, I paint them and find them around me everywhere.

I particularly love this triple spiral which has been called the triskelion or triskele. It’s tricky to draw but I have fun playing with it. I have a stencil that often finds its way into the background of my paintings.

I believe in the power and attraction of symbols. When they show up or call to me, I listen, I do my research and get curious why they are showing up repeatedly in my consciousness now. 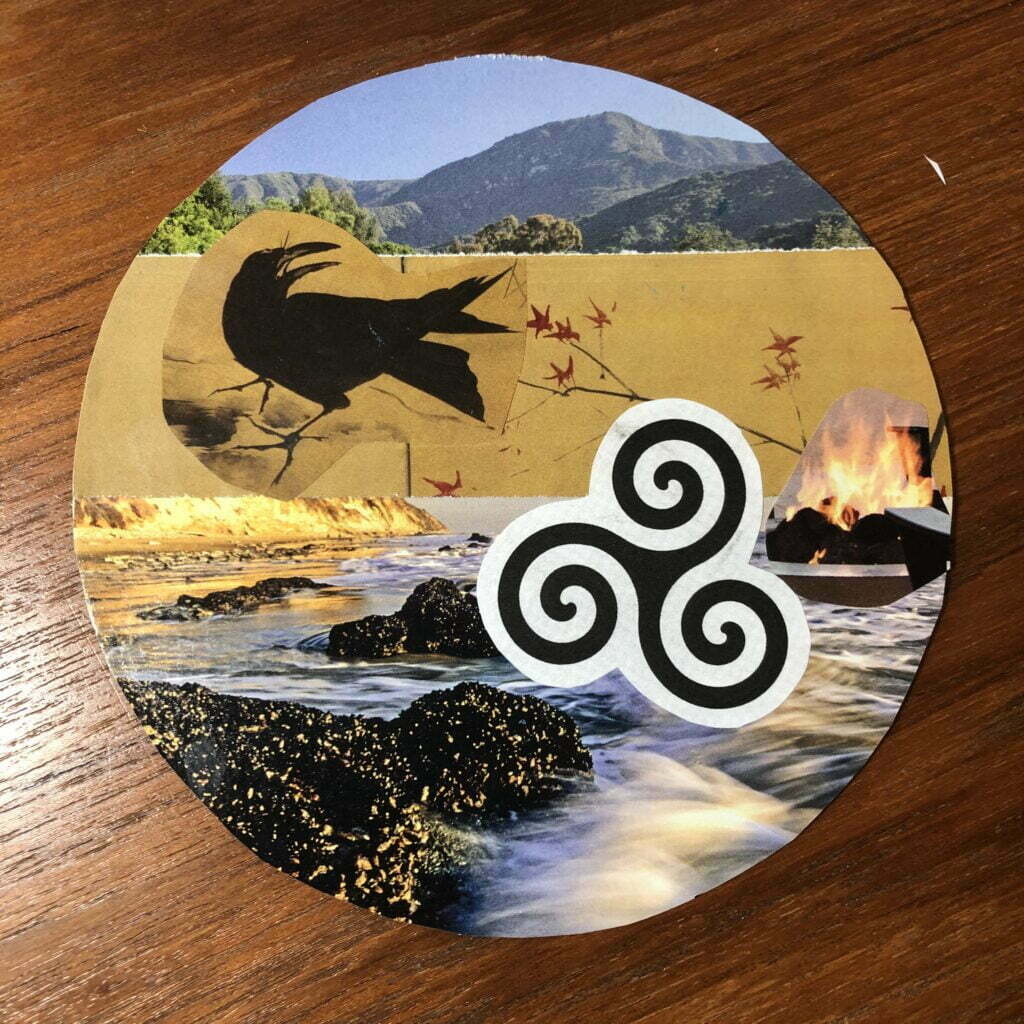 What Does the Triskelion Symbol Mean?

According to www.Blarney.com this symbol is derived from the Greek word “Triskeles” meaning “three legs”, the Triskele or Triple Spiral is a complex ancient Celtic symbol. Often referred to by many as a Triskelion, its earliest creation dates back to the Neolithic era, as it can be seen at the entrance of Newgrange, Ireland.

The triskele is thought to represent motion as all three arms are positioned to make it appear as if it is moving outwards from its center. Movement, or motion, is believed to signify energies, in particular within this Celtic Symbol the motion of action, cycles, progress, revolution and competition.

Some of the many connotations associated with the triskelion include: life-death-rebirth, spirit-mind-body, mother-father-child, past-present-future, power-intellect-love and creation-preservation-destruction to name but a few.

The Celtic Journey shares on their blog that “The triple spiral is also called the ‘spiral of life’, symbolizing life, death and afterlife.  The Celts believed that all things moved in eternal cycles, and the triskele reminds us of the cycle of life.”

It’s thought that through the combination of these two areas we gain one meaning of the Celtic triskele. It is believed to represent a tale of forward motion to reach understanding. However, this is thought not to be the only meaning, as it is also believed to represent three Celtic worlds; the spiritual world, the present world and the celestial world. Like the ancient Trinity knot, the number 3 holds a special symbolism within the triskele.

What the Triskelion Means to Me

The triskelion has multiple meanings but the one that is pulling me in during Covid-19 as essential to sit with and meditate on is that the three spirals represent the earth, sky and land as well as the three Celtic worlds: the spiritual world, the present world and the celestial world. I believe in the interconnectedness of all things on this earth and beyond. And we are seeing the reality of that right now with the global spread of this pandemic. I personally am spending time spiraling inward to connect more with spirit, to stay centered and grounded. I am working to strengthen the three legs of my own triple self and my connection to the natural world.

The Three Faces of the Goddess

The Celts also believed that this triple spiral represented the three faces of the Goddess: Maiden, Mother and Crone. As I am in my mid-50s, going through menopause, I am definitely called to images of the crone, the wise woman who can guide me into this new version and vision of my future self.

So much to explore in this rich symbol that appears across cultures.

As I continue my journey through collage, symbols and seeking meaning in the midst of the pandemic I find myself seeking even deeper connection to nature – the one place where it is safe to play right now. In today’s JourneyCircle™ I found myself playing with earth, land and sky but also the elements of air, fire, and water. I feel at peace and one with all that is today. I am cherishing my daily walks and my daily creative playtime. 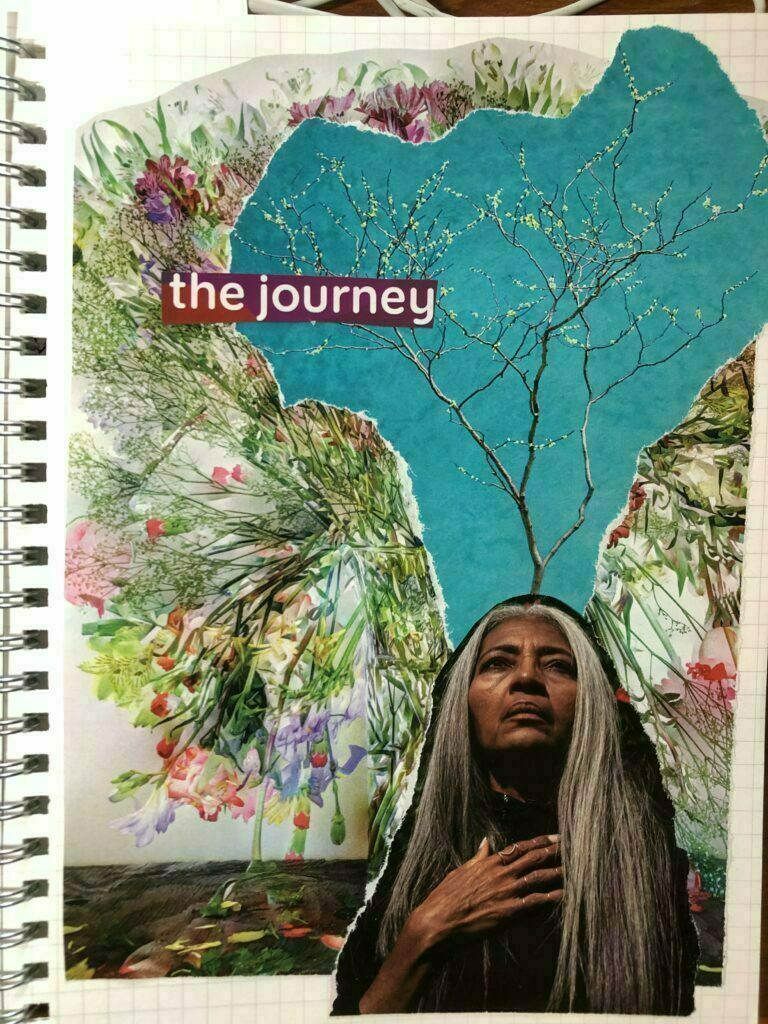 Is there a symbol that is calling to you currently? Please share in the comments. I need your inspiration? I’ve got too come up with 100 symbols for the 100 day project 🙂 And I’m only on Day 2.